If you are a Muslim living in Luton you probably don’t like them very much and are saying “They walk into our places of worship wearing shoes without an invite.”

On the other hand if you are an indigenous Brit (descendants of  the ancestors of the Islands since the days of the Roman invasion) than you probably like them  for standing up and  saying “Enough is enough, you have walked into the nation we love and trample all over our culture as if it does not matter, sorry but it does mate!.”

Dislike or Like them it seems they are pretty determined to stand their ground and are preparing to push back and take back Luton, and the other places now classified as Islamic quarters of London.  From an Islamic perspective perhaps now you are established in these land quarters as a foot hold in the globalisation of their faith, than perhaps it is reasonable that you say, “Britain First are mounting a counter-invasion of our Islamic territories.”.

Infowars endeavours not to endorse nor condemn non violent political activities remembering that “Sticks and stones may break my bones, but dirty foot prints on my carpet won’t”.

The point being if you are a Muslim you are going to have to forgive the infidels as they do not know just how hyper-senitive you are to anyone insulting Islam.   Dirty foot wear is probably just one of the things Britain First is doing as they walk through Luton kicking up the dust.

Here is an extract from a recent Britain First  news letter (you can make up your own minds):

Britain First is on the verge of a monster recruitment campaign all across the country.

Behind the scenes we have been working feverishly on a new and slick activist setup and we have a queue of around 200 new activists just waiting to be added to our regional groups.

This enormous influx of new activists is going to eat its way through a Mount Everest of recruitment literature very, very quickly.

Our existing stores are completely depleted, so we need to re-stock with immense amounts of new material immediately.

We need to urgently print 500,000 copies of our new leaflet (below) for a huge recruitment campaign over the next few months. 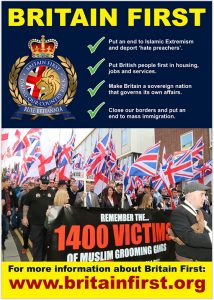 This is the “state of play” for this appeal so far.